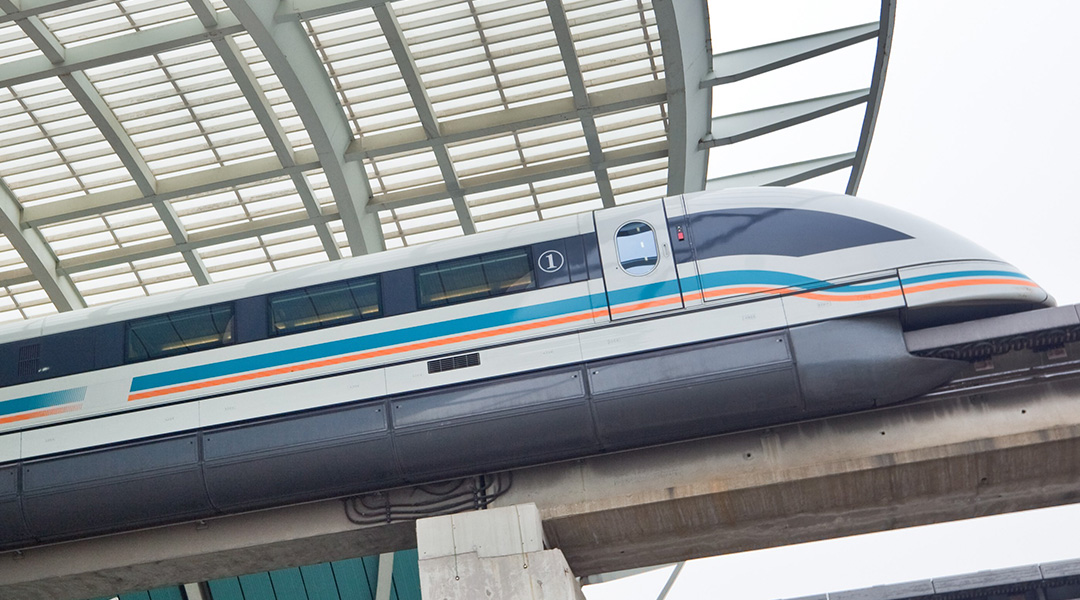 With new expenses like IMO 2020’s sulphur caps and the German Maut toll being introduced, we take a look at an increasingly credible alternative: a train that makes no noise, does minimal damage to the environment and floats… An opportunity for the transport industry?

Imagine a silent form of transport that doesn’t make nearby buildings vibrate every it runs past. No, I m not talking about Elon Musk’s latest foray into tunnels, but a much older technology, which first took off in 1984 in Birmingham: Maglev.

Maglev (Magnetic Levitation) is a type of train that uses magnets to propel itself forward. In laymen’s terms, one magnet repeals the train and keeps it ‘floating’ while the second pulls it forward. The most obvious benefit of this technology is the lack of friction. There are no wheels making contact with the ground, so the carriages can bomb along at great speeds (the fastest line in operation reaches 431 km per hour).

Early failure in the west and growing investment in the east

The first commercial maglev rail line operated from Birmingham airport for about 11 years before high maintenance costs saw it shut down. Other countries experimented with the technology, but activity ground to a halt after 23 people lost their lives in a 2006 crash between a maglev train and a maintenance vehicle in Germany.

In Asia, however, a number of projects have taken off, including the S1 route from Shichang to Pingguoyuan in China. Speaking to the Guardian, Jie Li, who designed the 8 km long S1 line, said: “Maglev has no wear and tear, no contact noise and very low vibration. I think maglev is going to take off.” And maybe he’s right. In Japan, a new maglev line called the Chuo Shinkansen is being built, which managed to reach 603 km per hour during testing.

Despite this, there is still some way to go before the technology is reembraced by the Western world.

The issues with maglev

Of course the technology is not without it’s issues. The biggest is cost. When a maglev line between Beijing and Shanghai was first touted, it became apparent that upgrading the existing line would be much cheaper. Japan’s Chuo Shinkansen is expected to cost $49bn. Another issue is the lack of market opportunities.

Roger Goodall, professor at Loughborough University and a key player in the creation of the Birmingham maglev system, told Railway Technology: “There are three criteria you need to fulfil. The first is a large megacity at both ends, the second is a distance of about 500 miles because if the cities are too close it’s not worth going fast and if they are too far air travel comes into its own, and the third is having no existing railway.” That certainly limits the scope for future projects.

Something for the transportation industry?

Sergey Smirnov, who organised 2018’s biennial conference for maglev engineers and entrepreneurs in St Petersburg, is confident the technology can succeed. Scientists, he explains to The Guardian, have been working on the system for years and many now believe it offers an attractive option in terms of price, speed and low maintenance costs. In addition, the system is very energy efficient and environmentally friendly.

Now we’re not there yet, but what if the technology could be repurposed for the transportation industry? Air freight is expensive, driver shortages are well documented and environmental regulations are getting stricter by the day. Imagine a system of maglev rails, linking factories, production plants and warehouses. Products shipped quickly and silently across hundreds of km…

Sure, it’s science fiction today, but in the future who knows!

Johan is co-founder of TenderEasy and passionate about changing the way the freight industry works and making complex processes simple. He has more than 15 years’ experience in logistics and freight procurement and has worked across all transport types.